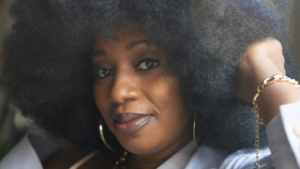 Born in Philadelphia , music was calling Hayward’s name from a very early age. Getting her first taste for the musical spotlight, Hayward started singing in church. Like many legendary singers before her, most notably: Whitney Houston, Patti LaBelle, and Aretha Franklin, the church provides the basics for soul singers when learning breath control, tone and confidence. Hayward has indeed taken notes and passed the class with flying colors.

Growing up and finding her voice, Hayward spent many days and nights belting out the songs from her idols, including “Queen of Hip-Hop Soul”-Mary J. Blige, the pioneering gospel group, The Clark Sisters and the iconic gospel music great, the late Mahalia Jackson.

After taking a leap of faith and resigning from a medical career, Hayward’s vocal potency landed her the opportunity to record background vocals for pop star Pink and open for internationally-acclaimed gospel artist Marvin Sapp in Philadelphia. In addition, Hayward has shared the stage with Carol Riddick, The Mighty Clouds of Joy, Cedric Napoleon (Pieces of a Dream), Mozaic Flow, Lee Williams and the Spiritual QC’s, The Joy Boyz and Shawn “Coco” McMillan just to name a few!

Currently, Hayward is enjoying the experience of performing to sold-out crowds at renowned music venues throughout Philadelphia. Hayward’s vocal ability and stage presence are potent for all who dare to experience it without a filter.

Hayward’s performances have been hailed as electrifying within the walls of the tabernacle as well as on stages of acclaimed live music venues. On any given evening, she exudes the gritty tenacity of Tina Turner paired with the sultry vulnerability of British-Nigerian renowned vocal enigma, Sade.

With Hayward currently serving in the United States Navy Reserves, she learned valuable life lessons of self-discipline and an incredible work ethic which has naturally flowed over to her rising music career. As her fan base continues to grow, Hayward has her eyes set on the big picture.

In May 2020 Tanqueray began working with one of the industry’s “behind the scenes” and “go to guy” TL Shider, Producer, Musician, Arranger, and Engineer from Plainfield, NJ.  From this union Tanqueray debuted in August 2020 with the track “This Thing” which made #1 on the Urban Influencer UK Soul Chart. In September 2020 the highly acclaimed “This Kind of Love” was released which propelled Tanqueray on UK Rotation making #1 on the Urban Influencer UK Soul Chart, #3 on the Global Soul Chart, #3 on the UK Soul Chart, Winner of the President’s Choice Award for Indie Soul Café Radio in New York in November 2020, Winner of Soul Tracks “New Artist of the Year” in December 2020 and nominated for “Best International Artist” for UK’s Bright Star Awards in December 2020. In March 2021 Tanqueray was nominated in three categories for UK’s Floradio Groundbreakin Blackout Soul People’s Choice Awards for 2020. Tanqueray was nominated for Best Soul Female Artist, Best Soul New Comer, and Best Soul Single for “This Kind of Love”.

Tanqueray’s highly anticipated debut album “Definition of the Woman” was released March 26, 2021. The lead single “Caught Up” was #1 for four weeks in a row on the Urban Influencer UK RnB and Soul Chart, and Radio Experts UK RnB Soul Chart, #3 on the UK Global Soul Chart, and #6 on the UK Soul Chart, and #7 on The Official U.S. Indie Soul Chart. Caught Up also earned a UK Itunes Music Plaque being #83 on the UK RnB chart.

As 2023 kicks off, Tanqueray debuted at #5 on the Amazon UK RnB chart for the single “You Lied” which will be part of her second in studio album “Definition of a Woman II” which will be released in summer 2023.

Tanqueray Hayward’s artistic impact and contribution to the musical landscape of Philadelphia is now becoming undeniable. Tanqueray is working tirelessly to prove herself worthy to be mentioned in the company mentioned above. Stay tuned!